“Jared Leto looks like he sells essential oils outside GameStop.” 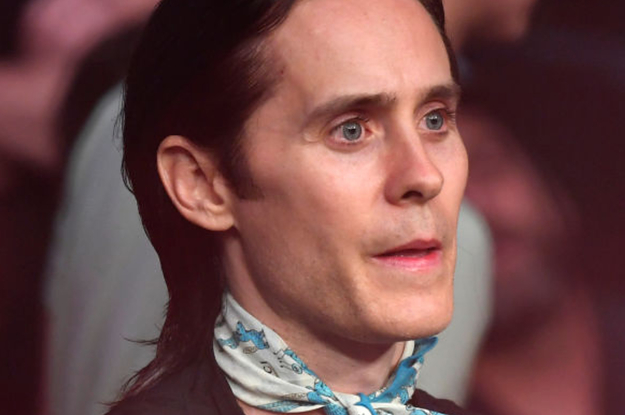 Olivia Jade Reacts To “Gossip Girl” Jab About Her Mother

“I have suffered and have kept to myself for over five years.”

Linda Evangelista is opening up about why she has stepped away from the spotlight in the past few years.

In a shocking Instagram post, Linda claimed that she was “brutally disfigured” by a cosmetic procedure five years ago.

“To my followers who have wondered why I have not been working while my peers’ careers have been thriving, the reason is that I was brutally disfigured by Zeltiq’s CoolSculpting procedure which did the opposite of what it promised,” Linda wrote.

She continued, “It increased, not decreased, my fat cells and left me permanently deformed even after two painful, unsuccessful, corrective surgeries.”

The condition, called paradoxical adipose hyperplasia, is “a very rare but serious side effect” of the procedure, which Linda says she was not made aware of.

PAH causes the targeted fat cells in the treatment site to grow bigger instead of become smaller, which Linda says has left her “unrecognizable.”

“PAH has not only destroyed my livelihood, it has sent me into a cycle of deep depression, profound sadness, and the lowest depths of self-loathing. In the process, I have become a recluse,” she explained.

Linda is now suing CoolSculpting’s parent company, Zeltiq Aesthetics, for “severe and permanent personal injuries and disfigurement,” which have caused her “pain and suffering, severe emotional distress and mental anguish” as well as “economic losses.”

“With this lawsuit, I am moving forward to rid myself of my shame, and going public with my story. I am so tired of living this way. I would like to walk out my door with my head high, despite not looking like myself any longer,” Linda concluded.

After Linda shared her story, she received an outpouring of support from other models, including Gigi Hadid, Cindy Crawford, and Christy Turlington.

You can read all that Linda had to say below.

As people say, numbers don’t lie! One study collected and crunched digits across 100 cities to find the best place for singles to match and mingle. According to Apartment List, who curated the study along with Bumble, Washington D.C., Boston and Atlanta are the top three places for single people in 2021.

In their reveal of the results, Apartment List offered some reassurance to those scarred by dating. Turns out that dating challenges can partially stem from where someone lives. That’s right, not all cities are equally filled with the opportunity to be wined, dined and swept into love.

“Proximity is one of the major factors in finding the perfect SO for you,” Apartment List wrote on their website. “If you’re ready to finally find “the one,” there are some cities where your odds may be better.”

To narrow that list down, the housing site paired with the dating app to examine 100 US cities. The study measured four categories including dating satisfaction, social satisfaction, dating affordability and percentage of singles.The total score for each city is the weighted average of the four individual scores. Dating satisfaction held a 40 percent weight while the remaining categories held 20 percent each in the study.

Overall, the study pinpointed a few trends among the single people assessed. Apparently, the East Coast is the best coast to live out your romantic dreams. Six cities from the winning coast claimed spots in the top ten list. In addition, college cities are also heavy hitters for singles with 50 percent of the list mirroring the site’s “Best Metros for College Grads” list.

Still, a winner had to be declared. At the top of the list sits the nation’s capital Washington D.C. The city ranked high in percentage of singles as more than half of the city’s population identifies as single. Washington D.C. also ranked high in dating affordability with a three-course dinner and movie date landing at a $105 price point.

Rihanna On ASAP Rocky Helping Her With Savage X Fenty

Don’t get it twisted. Rihanna is a “Fashion Killa” boss.

At the premiere of her Savage X Fenty Vol. 3 show, RiRi was asked if she consulted with boyfriend A$AP Rocky on any of her men’s designs — and that’s when she let her fans know who is in charge.

Although A$AP didn’t have any parts in the design process, RiRi said her beau still liked the clothes.

“Listen, he’s proud of what I’ve been able to accomplish and all of my designs,” she gushed.

According to Forbes, Rihanna is valued at $1.4 billion, and her Savage X Fenty brand is worth $1 billion. The singer, who started it back in 2018, said she still doesn’t believe how far she’s come in her career.

“It wouldn’t seem possible. But I also know there’s nothing that is impossible to God,” she said about her success. “Listen, I’m still pinching myself where I’m at every day.”

What I would give to be Rihanna, even for a day!

ESCAPING 100 Layers of ICE vs CARDBOARD!

Blippi Goes Kayaking and Makes Sandcastles at the Beach! | Educational Videos For Kids

The 5 Best Shoe Styles to Wear With Wide-Leg Pants

Rihanna On ASAP Rocky Helping Her With Savage X Fenty

10 Beauty Tips from Venus Williams in Under 5 Minutes