In “Life Goes On,” their No. 1 single released in November last year, the members of BTS reached out a reassuring hand.

“Close your eyes for a moment / Hold my hand,” they sing before launching into the chorus. “To the future, let’s run away.”

It feels as though that future finally arrived on Friday, with the release of the group’s latest single, “Permission to Dance.” Cowritten by Ed Sheeran — along with Jenna Andrews, Steve Mac, and Snow Patrol’s Johnny McDaid — the song is packed full of irresistibly bouncy piano bars and lyrics written with the sole intention to uplift. According to the group’s label, Big Hit Music, “Permission to Dance” is “dedicated to anyone who is having a bad day or is discouraged in the face of reality.”

Providing comfort in the midst of darkness is what BTS does best; it is what they have always done, throughout the eight years since their debut. When the COVID-19 pandemic began, forcing the group to indefinitely postpone their upcoming worldwide stadium tour, RM, Jin, Suga, J-Hope, Jimin, V, and Jungkook threw themselves into their new mission to provide their fans, ARMY, with a distraction from the despair. “Permission to Dance” is the latest single in the group’s series of pandemic-produced work, which includes last summer’s smash hit “Dynamite,” current Billboard No. 1 single “Butter,” and their November album BE.

“Most of the music I grew up listening to talked about dreams, hope, and introspection in the midst of despair,” rapper Suga told BuzzFeed News in May, when the group released “Butter.” “I got influenced by that kind of music and became who I am today. So in turn I also want to give that kind of influence.”

Where the music of the past year has provided distraction and companionship and melancholy understanding, “Permission to Dance” offers another type of comfort: the hope that that future promised in “Life Goes On” is only just around the corner. That hope manifests physically in its music video as an omnipresent flock of balloons in varying shades of purple — the signature color of BTS and ARMY. A newspaper headline seen in the song’s teaser, released earlier this week, reads: “Harbingers of hope: Purple balloons signify the end of COVID-19.”

As always, the music video is full of these subtle nods to the BTS ARMY, even down to its release date — July 9, 2013, was the day the group’s fans were officially given their name, and every year the fandom celebrates its anniversary on this day. But “Permission to Dance” also celebrates community on a wider scale, spotlighting a diverse cast of characters from across the globe and, in doing so, promising that the message of hope conveyed with the song is extended to everyone, without exception. The inclusivity of the song’s message is reflected even in its choreography, which integrates the international sign language for “dance,” “fun,” and “peace” into its bridge.

A particular spotlight on service workers throughout the video evokes the message of BTS’s 2018 song “Anpanman.” Inspired by the Japanese picture book hero of the same name, that song was a promise by the members to give their all in improving the lives of fans; when they debuted its performance, they dressed in the uniforms of firefighters and construction workers, the everyday superheroes who do the same. They performed it again on the Today show in 2020, at the height of the COVID-19 pandemic, when healthcare professionals were rightfully being heralded as our frontline heroes.

“Permission to Dance” presents something similar: scenes of masked-up employees in an office, being welcomed back after a year away; a server dancing alone in an empty diner; a janitor ballroom-dipping a teacher in a deserted school hallway; a mail carrier catching sight of one of those ever-present purple balloons as she goes about her duty. The final 60 seconds of the music video is dedicated to the crew who works with BTS behind the scenes: a crowd of stylists, choreographers, makeup artists, every one of the multitude of people who do the supporting work to make music happen, dancing the song’s choreography alongside the stars themselves. It’s a warming celebration of community, and fine, I’ll admit it: It melted my pessimistic heart. (Like butter. Heh.)

The message of “Permission to Dance” is by no means revolutionary, but to process it with a completely uncynical mind feels radical nonetheless. As humans, we are so predisposed to denying ourselves joy, and it can feel inappropriate — or just straight-up impossible — to be happy after almost a year and a half of increasingly dragging hopelessness.

“Permission to Dance,” though, is a refreshing reminder that not only is happiness possible, but there is no shame in feeling it — even if only, to begin with, for the three-minute-and-seven-second duration of a carefree summer pop song.

21 Celebs Who Were Not Cool In High School

Courtney denied Chrissy’s claims that she’d reached out via text to apologize after the cyberbullying backlash and said Chrissy should “stop griping about being canceled.” 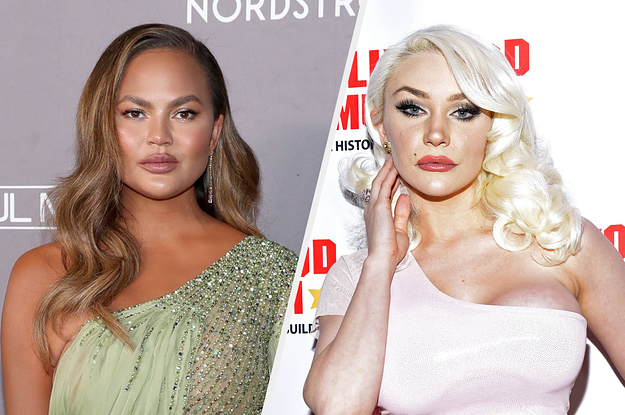