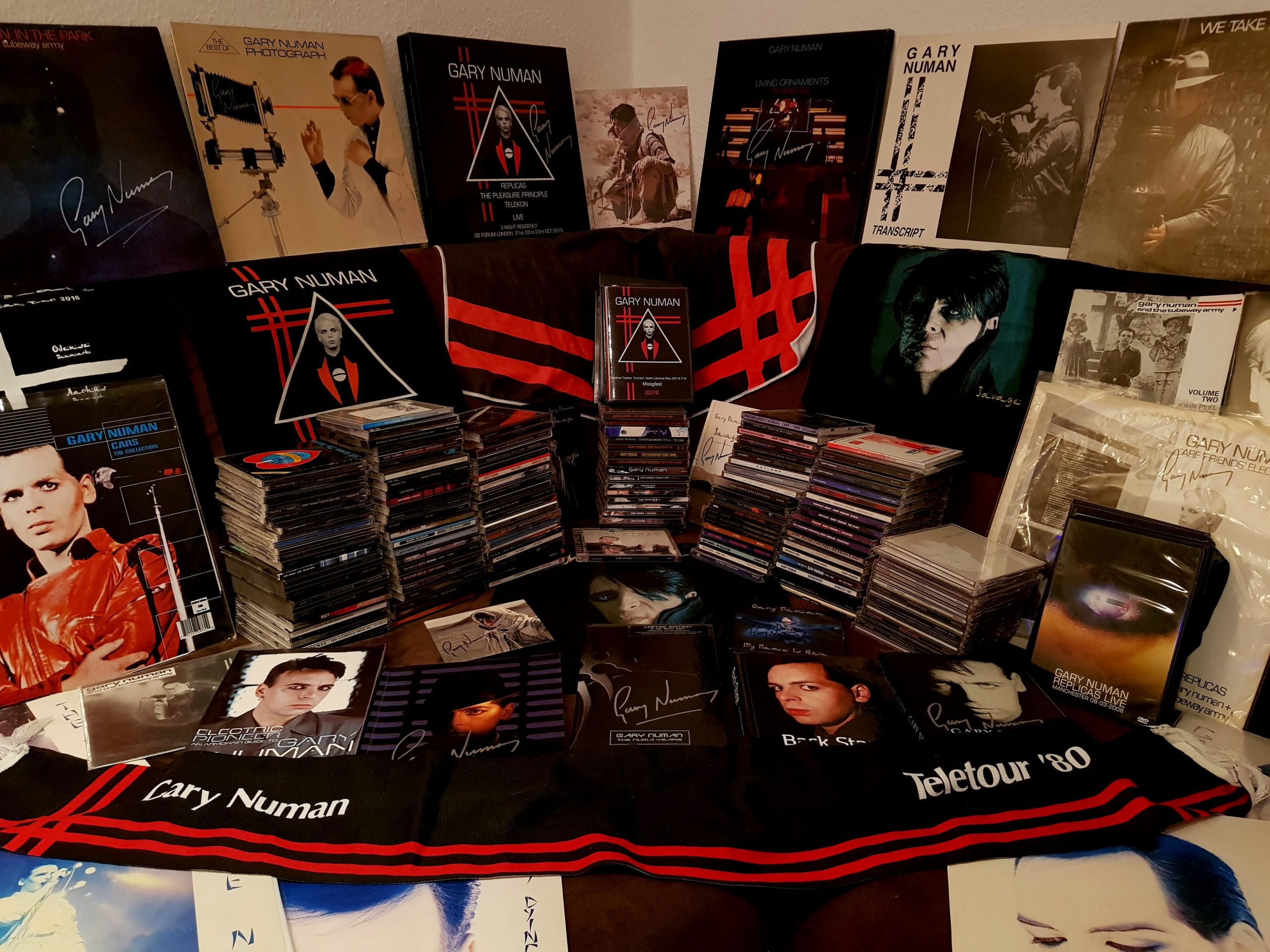 When did you become a Superfan of Gary Numan and why do you like him?
I became a superfan in around 1993 when Gary was on a creative low. I bought a cheap CD compilation called Electric Dreams which included Cars and Are ‘Friends’ Electric?. I was unaware of his work before that because he wasn’t that big in the German charts. I was very impressed by his use of analogue synths and that unique voice.

As a fan of dystopian novels, I was amazed by Gary’s mysterious lyrics and ever-changing album cover images from 1979 to 1984 that seemed to come straight from sci-fi movies. This was quite unusual. I was still in school and everybody was listening to Eurodisco, techno or grunge.

What items do you have in your collection?
I’ve got everything from records and CDs to posters and clippings from vintage magazines, T-shirts, tour programmes and a 1980 Teletour scarf. 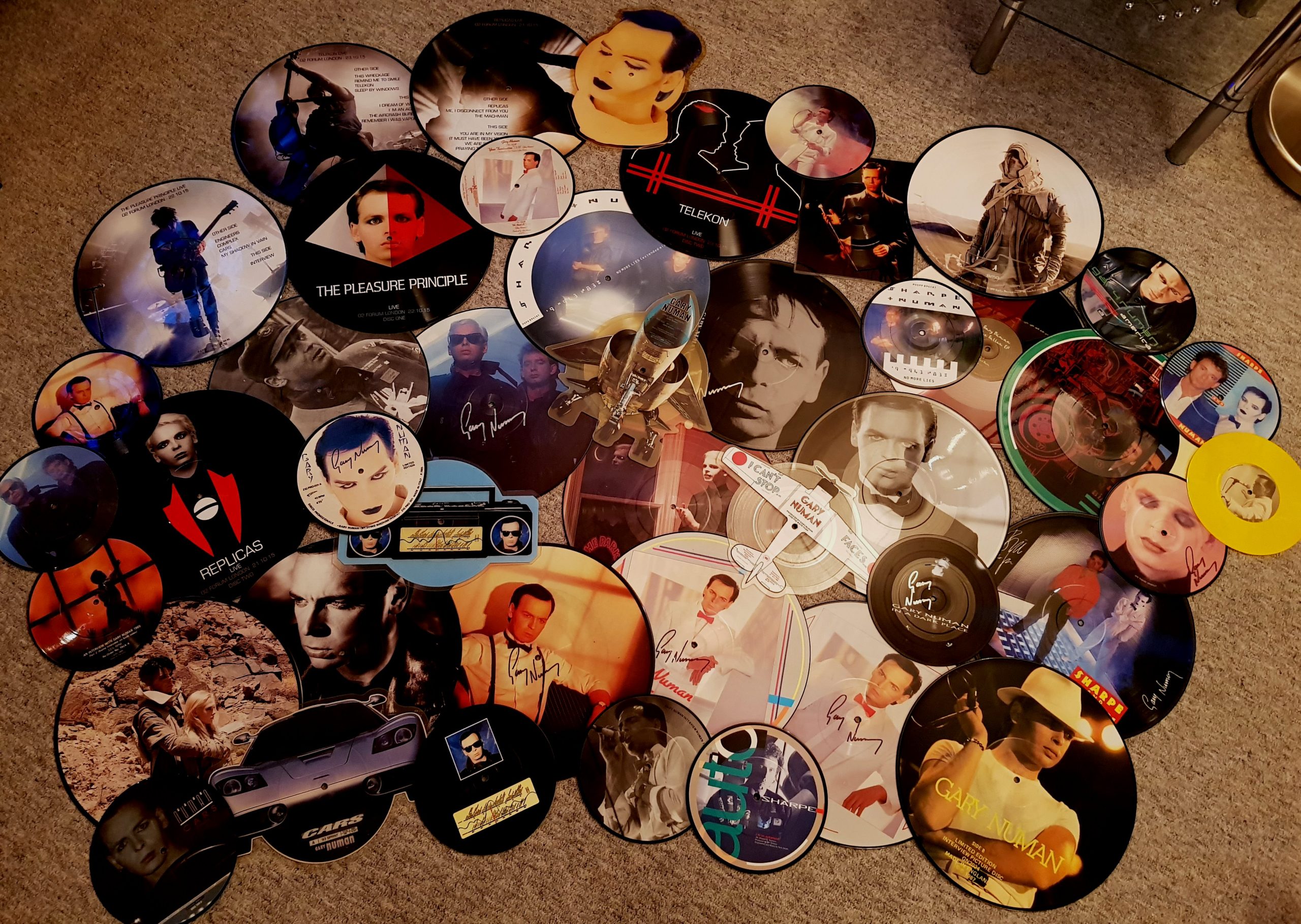 How much have you spent on your collection?
I couldn’t begin to guess, but it must be several thousand euros.

Have you ever met Gary or his band?
Yes, several times. I was lucky enough to be asked to do a telephone interview with Gary while working for a synth-pop fanzine in the 90s. Since then, I’ve often met Gary and his band prior to his concerts at meet-and-greets.

Do you have a favourite item in your collection?
I adore the 1980 tour scarf and the poster of a Japanese fashion advert that he did in the early 80s, which he signed for me.

If you could ask Gary one question, what would it be?
Being an atheist like Gary, I would ask him if he might sign an issue of the Bible for me next time (just kidding!). 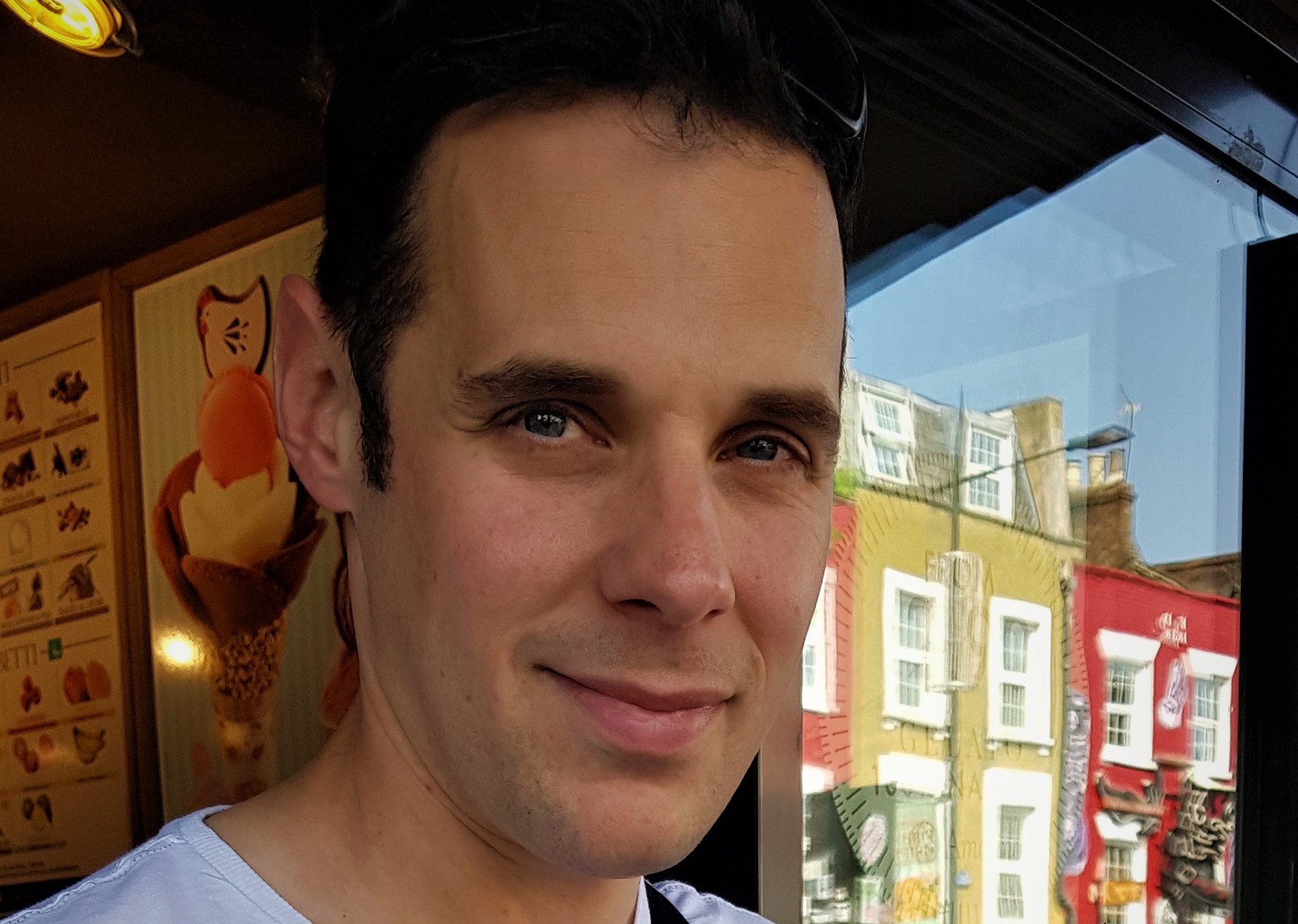 Listen to “Shade of Yellow” by GRIFF

Listen to (Feels Like) “Heaven” (Fiction Factory Cover) by Roosevelt

Should you be searching for a thoroughly decent indie electronic-pop album to wrap your ears around at the moment. A good one to look at that might have skipped your notice is “Polydans” by the German producer Roosevelt. In comparison to his first two albums. I haven’t spoken an awful lot about “Polydans“, his third one (released in March). Let me share some feedback on it now. This release locks in with spirit of the 80s. Production-wise, the album remains consummate in its entirety. And the body of work is unskippable throughout. With the stats totted up, streaming figures suggest the track “Strangers” has proved most popular. I am sticking with calling out my first choice, “Sign“, as a standout, that I wrote about on the blog.

The reason why I am writing about Roosevelt today isn’t to share a quick outline of the latest album. I wanted to bring his sparkly cover version of the Fiction Factory, 1983, top 10 chart-topper track (Feels Like) “Heaven” to your attention which appears as a bonus track on the Deluxe Edition.

According to the internet, there have been 18 recordings of (Feels Like) “Heaven” by different artists. Roosevelt’s glittery, upbeat makeover comes in as #19. What I like about the new interpretation of the song it is significantly different in style to the darker new-wave vibes found on the original Fiction Factory edit.

I think the Roosevelt version of the track will go down a treat when played live. He starts a US tour next week and will eventually snake it’s way over to Europe next year.

(Feels Like) “Heaven” is out now – Find it ONLY on the deluxe edition of “Polydans“. (One of 8 bonus tracks)

Listen to “Sweet Talker” by Years and Years and Galantis

The thing about Galantis is. I pretty much know what to expect from the Swedish dance hit-makers because their signature sound is easily identifiable. The thing with a Years & Years and Galantis collaboration is. I pretty much can guess how it will pan out musically as well. Had they not delivered a bona fide dance banger like “Sweet Talker” is. I may have needed to send them over some serious questions. What I do like, though, on Years and Years part. The upcoming album “Night Call” seemingly, covers more ground in a music sense than the previous projects. Because as I have noticed with the singles to date. “Starstruck“, “Crave“, and now “Sweet Talker“, the styles explored differ vastly.

I am the kind of music listener who likes to play dance tracks in the winter months to help keep the winter blues at bay. Therefore, I am happy, “Sweet Talker” is the euphoric, fist punching anthem I was hoping for. I am also glad that the track includes a big orchestral arrangement by way of embellishment. Without this, it may have sounded too similar to Whigfield’s seminal bop “Saturday Night“, methinks.

It genuinely pleases me both the lyrics and narrative of the track are self-explanatory. There is a time and a place for tracks steeped with lyrical depth. “Sweet Talker” just isn’t one of them. It’s a dance track, through and through, of the kind that needs to be played turned up loud. That is all.

If you were looking for some exciting Years & Years news. Olly has exclusively revealed in an interview with Radio One DJ Clara Amfo. (In a chat during “Sweet Talker” premiere as Hottest Record In The World) He will be hosting this years’ New Year’s Eve celebrations on the BBC. (In previous years, there have been special live concerts from Queen and Adam Lambert, Robbie Williams and Gary Barlow.) Olly teased he will be counting us down to midnight playing Years & Years tracks (duh!) and some covers. There will be some extra special guests making an appearance also.

This, New Years Eve. With Years & Years on the television I have no reason to go out. I will definitely need to get some special snacks in, though.

NOW That’s What I Call Electronic coming this January

Synth-pop fans rejoice, as NOW have announced a major 78-track 4CD compilation of the very best in electronic music.

NOW That’s What I Call Electronic will feature songs from artists such Queen, Blondie, Duran Duran, Eurythmics, ABBA and more.

The album showcases, it says, “the emergence of synth-pop as a dominant sub-genre of new wave”.

Containing such classic tracks as Visage’s Fade To Grey, Japan’s Quiet Life, Ultravox’s Vienna through to OMD’s Enola Gay and Paul Hardcastle’s 19, it promises to be a comprehensive history of synth-pop.

NOW That’s What I Call Electronic is released 7 January 2022.

Read more: The story of That’s What I Call Music