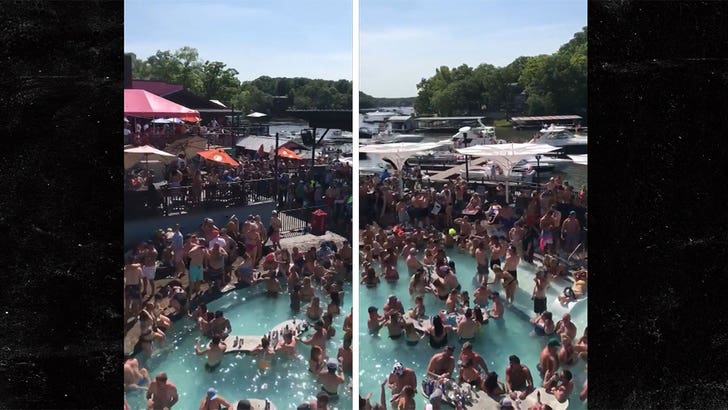 The Missouri bar, where a gaggle of pool partiers packed in like sardines over the holiday, says it’s NOT going to stop hosting aqua ragers … no matter how much heat they take for it.

Andy Prewitt‘s a manager at Backwater Jack’s — where dozens of people gathered for a massive pool party in Lake of the Ozarks — and he tells TMZ the good times must roll on into summer … meaning they’re not planning to ax any future get-togethers like this.

We’re told the reason Backwater Jack’s is pressing forward is because, well, it’s a matter of financial survival. Prewitt says while the staff is concerned about public health, they’re equally worried about making ends meet and keeping the business afloat. So, they’ll do what they must.

Memorial Day Pool Party in the Ozarks! https://t.co/TcuOqim8Df via @YouTube #COVIDIDIOTS Anyone who didn’t practice CDC, DHSS, and KCMO Health Department social distancing guidance should self quarantine for 14 days if they have any compassion for others.

ICYMI … upwards of 1,500 heads flocked into BJ’s on Saturday for a daytime shindig in their shallow pool — and funny enough, we’re told management never considered shutting it down … despite the fact the event got a tsk-tsk scolding from Missouri officials.

One other thing … Prewitt goes on to tell us he feels like Backwater is being unfairly singled out — as he claims other bars in the immediate area were equally as busy. And, besides, the manager says they tried their best to be quarantine-friendly, checking temps when folks walked in and giving them hand sanitizer to use on themselves. Uh … thanks?

This is a video from Snapchat maps in the Lake of the Ozarks Saturday pic.twitter.com/hSczsbPjnU

In any case, Prewitt says they’ve got 2 more big blowouts like this planned through summer, which they’ve appropriately dubbed No Ducks Given parties.

There will be some smaller ones too … ditto on the ducks, we’re guessing.