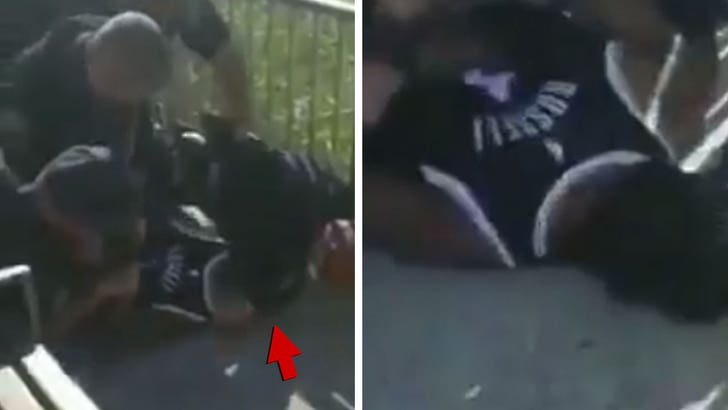 4:13 PM PT — The officer who was caught on camera applying a chokehold to a man he and other cops were trying to detain has now been suspended from the force … and won’t make a dime while he’s out.

While a full investigation is still underway, there is no question in my mind that this immediate action is necessary.

We are committed to transparency as this process continues.

NYPD Commissioner Dermot F. Shea made the announcement Sunday, saying … “Accountability in policing is essential. After a swift investigation by the Internal Affairs Bureau, a police officer involved in a disturbing apparent chokehold incident in Queens has been suspended without pay.”

He added, “While a full investigation is still underway, there is no question in my mind that this immediate action is necessary. We are committed to transparency as this process continues.”

3:52 PM PT — The NYPD just released body cam footage of the minutes leading up to the chokehold out by Rockaway Sunday, and it’s incredibly telling.

The face-off with officers actually started with three different men, two of whom were white, and they were all talking trash to the cops trying to understand why they were out there approaching them to begin with. The guy who ended up getting cuffed was among the group too, but he was the only one to get tackled and roughed up in the end.

It’s not entirely clear why the cops decided to bum-rush him — you hear in the body cam footage that one of the officers felt he “squared up” and got into a fighting stance, and apparently the cops felt threatened. It doesn’t look like he did though from what we can tell.

In any case, after the police pounced … one of the officers wrapped their arm around the guy’s neck, which caused his buddies to scream in a panic. He was only held down for a few seconds, and it does not appear he lost consciousness during the ordeal.

You can also hear multiple people standing around and watching, openly asking why the black guy was the only one to get arrested — when the other two guys (one in particular) was mouthing off just as much, if not more so. No clear answers for that one, but check it out for yourself.

Less than a week after New York City said no more chokeholds to cops, an NYPD officer used one while making an arrest … to the point the person he’s subduing loses consciousness.

A handful of NYPD officers were filmed Sunday near Rockaway Beach attempting to detain and arrest a black man — with one of the cops wrapping his entire arm around the guy’s neck and putting his body weight on him from the ground, while the others put cuffs on.

You hear bystanders — who are filming the whole thing — start to scream out in a panic, telling the officer to stop choking him, which eventually gets him to release.

At that point, it appears the man being arrested has gone limp and is unresponsive — some of the folks standing around say “he’s out.” He had indeed passed out and was led away by police moments later.

It’s unclear if and when he regained consciousness — his current condition is also unknown.  We also don’t know why he was being arrested, and the NYPD isn’t saying.

The NYPD did say, “We are aware of the video and there is an active investigation underway by the Internal Affairs Bureau. This matter is taken extremely seriously and we expect to have an update this evening as the investigation unfolds.”

Bear in mind … the City JUST made it illegal for cops to do this, unless their lives are in immediate danger. They even named the law after Eric Garner.

Again, and again … what is so remarkable about these encounters is that cops know they’re being videotaped but it doesn’t seem to deter much.